Karen loves nothing better than digging out great local history tales. Clairitage debuted with Silver Mountain City: Ghost of the Sierra (the history of a now-empty ghost town — no actual ghosts!) Other books soon followed, including guides to several local cemeteries. Among the most fascinating cemetery tales: a diminutive Welshwoman who foretold her own death.

Karen’s latest newsletter about an 1885 murder http://mailchi.mp/f233cfd49602/the-sarman-murder?e=af46ceff47 caused our paths to cross again. Karen had followed my award-winning book with co-author, artist Elizabeth Williams, The Illustrated Courtroom: 50 Years of Court Cases, because of her abiding interest in crime cases like the 1986 slaying of Jennifer Levin by “Preppie Murderer” Robert Chambers. Our book came to mind again when Karen wrote about the case of Zack Field and Mary Gray.

Adam Uber’s saga (http://blog.clairitage.com/2017/12/01/genoas-hanging-tree/) was another ghost story Karen found riveting. Was it founded on truth? You be the judge. As Uber was hanged (hardly rare in those days), he loudly cursed the merciless lynch mob who strung him up from the hanging tree which stands to this day. And yes, you’ve guessed it: those locals began meeting unfortunate ends. 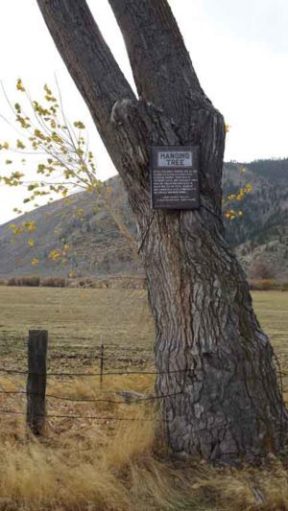 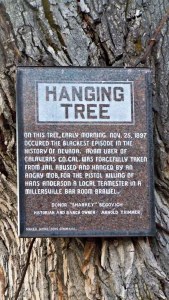 Another story sprang from a lonely tombstone at Gardnerville’s Garden Cemetery proclaiming “Murdered” It is an enduring mystery and the headstone suggests William Moore, 67, was murdered in 1800 when his tiny cabin was set ablaze. However, some question if he ever even really died. A poor man in poor health, he lived in isolation for 20 years save for his horses and few head of cattle, near the east fork of the Carson River above Horseshoe Bend.

Law enforcement’s initial search of the charred remains came up empty as did locals’ search. On December 26, 1800 Sheriff Brockliss and Judge Dake had another go finding a few small charred pieces of matter that might have been bone. Might.

Dr. Gerdes of Gardnerville, however, pronounced them shards of a human skull. On close examination he found “three small shot” embedded in the bone. The local newspaper promptly dubbed this as “almost positive evidence that William Moore was murdered, and his cabin burned over his body.” Dr. Gerdes opined that the position of the bone might explain why the fragment was charred but the shot hadn’t melted. Read more at http://blog.clairitage.com/2017/12/07/murder-or-was-it/ .

It’s awash with wild details like the rumors that Moore always had kept a human skull in his cabin, “the victim of his rifle in former years.” Soon, a hapless fellow named Indian Mike was placed under a citizen’s arrest for causing his death, yet the savvy jury delivered a not guilty verdict in a matter of hours. So many colorful stories and lives…

Two years work went into going deep into Aileen’s (Lee’s) life, from her childhood to her early run-ins with the law and later to conviction for holding up a liquor store with a gun and then of course the murders which meant covering her court hearings and attending every day of her trial. So for me, at least, it is great to see that the book is still around! I owe many of you out there–and you know who you are–thanks for all your support over the years.

Chilling book, hot summer weekend? Heads up: $1.99 eBook prices on my Aileen Wuornos book Lethal Intent have been popping up everywhere (thanks publishers!) during the sizzling start to summer but those low prices will soon disappear. So, check out Lethal Intent if you are interested in the world’s first modern day female serial killer — as defined by then current FBI guidelines: killing strangers, different locations, cooling off period between murders, etc.

When you see the smiling child Aileen once was, surrounded by her family in their Michigan home, it is hard to believe what lay ahead — for Aileen, and for the six or seven men whose lives she took. It is, and always will be, a controversial case. Despite her brutal actions, many feel sorry for Aileen, empathizing with her in a way that is understandable. Yet it’s rare for male serial killers to get any empathy no matter how much abuse they, too, may have endured as children.

Forensic evidence showed that Aileen shot her first known victim inside his car–where he sat behind the steering wheel fully clothed–firing a .22 caliber bullet into his arm. She shot from the passenger seat. The bullet traveled on through his body. Aileen leapt out of the car and ran around the front, firing again until he was dead. She then turned his pockets inside out, stole his money and possessions and car, covered him in a piece of raggedy old abandoned carpet and drove off into the night.

Killing during a violent rape does not jibe at all with the story Aileen told in her original confession to police and is worlds away from her testimony a year later at trial (I was in court every day). The testimony that she killed all her victims in self-defense and that it was *she* who was the victim didn’t fit the forensic evidence but it *did* come much closer to the scenario made famous by the movie Monster (for which Charlize Theron won an Oscar) in which Aileen murdered men during brutal rapes to save her own life.

I am certain she was raped but by whom and when, that is a tougher call. Aileen was a prostitute working the streets for years. Of course she was raped. She may have been raped when as young as eleven or twelve: that’s’ when she began charging local boys for sex.

Could Hollywood stand the brutal actions of the real life Aileen?  I’m not so sure they could, hence the loss of Aileen’s “robber who killed” reality in the film and the focus on Aileen as all victim. Judge the evidence for yourself. As you consider Aileen dropping her appeals and being executed in 2002 after a wretched decade on Death Row, spare a thought for Aileen’s victims’ families too, just as you would for the families and loved ones of any murder victims. And please share your thoughts.

Download for $1.99 from booksellers including Barnes & Noble and Amazon.

Yowza. (Is that a word?) GBH (Grievous Bodily Harm in British criminal justice parlance) was the last work from the late great British writer Ted Lewis, author of “Get Carter” (eventually a film starring Michael Caine.) Ted Lewis was a major talent who died young, apparently from alcohol-related issues, gone far too soon. His work was not for the faint of heart, that’s for sure.

In GBH, Lewis colourfully inhabits rather than portrays British gangland brutality in the 1960s. I could feel the locations in my bones and dreamed about the book and about gangsters Ronnie and Reggie Kray and other notorious figures who stole headlines back then. (It wasn’t all tea and crumpets, that’s for sure.)

The novel is all the more chilling for the torture, not always graphically written (although there is plenty of that) but possibly because of what is not spelled out. Ted Lewis’s compelling writing helps you power through his last work. I really couldn’t bear to put it down.

Now it is behind me, I am still pondering the plot twists and just how he did it? I plan to go back to review a few passages to check out where I now, in retrospect, believe turning points in the plot may have lay in wait. If you are a fan of hard core crime fiction with a strong stomach (you will need it), Lewis was a master. As one reviewer suggested, Lewis’s viewpoint suggested that surely he must have been dangerously close at times to the world he painted on paper: too close to have made it all up. On that I won’t comment. Gangland brutality was a cloud shrouding areas of England: you only had to read the newspapers. But Ted took it to new levels.

His brief chapters–few exceeded three pages–accentuated the speed of the ride.

45 years after legendary outlaw skyjacker D.B. Cooper disappeared from a plane, believed to have survived and headed off into the sunset with a pretty haul of cash, the iconic mystery involving his fate is back in the spotlight. Could the case — what happened to Cooper? What happened to the money? — be solvable? A powerhouse investigative team that includes FBI experts set about cracking this sizzling cold case. This mystery has always intrigued me as it has so many so I will be reading “The Master Outlaw” by (okay, I’m biased, my pal) reporter Tom Szollosi and Thomas J. Colbert and hanging on every word. Better still, the book is a companion piece to a new History Channel documentary, airing Sunday July 10 and Monday July 11. “The Last Master Outlaw” has been called “spellbinding” and “jaw-dropping” by veteran L.A. news anchor Sylvia Lopez. It’s available for order, Friday July 8. http://tinyurl.com/jz449m7

Witness to History When No Cameras Allowed: Artist Bill Robles has built a career on drawing courtroom dramas and bringing them to life. As KCRW writes, “Bill Robles has the mellifluous baritone of a broadcaster, but he’s made a living for over 40 years with his eyes — and his hands.” See some of his spectacular work in this article and related interview here: http://blogs.kcrw.com/whichwayla/2015/02/no-cameras-allowed-artist-bill-robles-makes-a-career-drawing-courtroom-dramas. And please see the eBook and print book versions available via http://www.amazon.com/The-Illustrated-Courtroom-Years-Court-ebook/dp/B00JMV2ZVU  Thanks for your support of these great artists.

Hot on the heels of the excitement about being named as one of the Times Literary Supplements’ “Books of the Year 2014” comes this nod from Kirkus Reviews, known to all authors. My co-author, courtroom artist Elizabeth Williams, and I are very jazzed about both. “The Illustrated Courtroom: 50 Years of Court Art”, which spans trials from Jack Ruby’s and the New York Black Panthers’ to Bernard Madoff and Michael Jackson’s, is available at a special price of $30. Great gift idea, if we do say so ourselves! (Above, Elizabeth Williams’ portrait of Martha Stewart during her trial. Elizabeth spent hours – no, make that days – waiting for Martha to turn her head enough to grab this image, created at warp speed.)